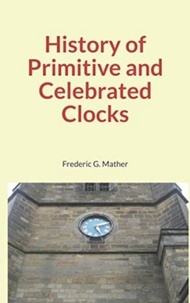 This book deals with the History of Primitive and Celebrated Clocks. "The old Romans used this water-clock; but, when their empire was destroyed, all Western Europe forgot the existence of such a thing. In the year 807 A. D., the Caliph of Bagdad, Haroun-al-Raschid, sent to Charlemagne a water-clock of this kind. Soon after we learn that, instead of the running water, a weight was used for turning the wheel.
But whether the clock was run by water or by a weight it was always a hard matter to have the hours of the same length. The escapement, which we shall speak of presently, made one hour more nearly the length of every other hour. The machine for telling the hours was, for many years, called the horologe, or "hour-teller." The word "clock" was applied only to the bell that struck the hours. It sounds very much like the Saxon, French, and German words that mean "bell." About nine hundred Years ago horologes were brought into England by the Catholic clergy.
Very large horologes were built into the towers at Canterbury Cathedral, in 1292; at Westminster, in 1290; at Exeter Cathedral, in 1317-the striking part of which is still in use; at the cathedrals of Wells and Peterborough; and at St. Albans Abbey in 1326. A smaller horologe was made for Charles V of France in 1370, by a German named Vick. Horologes, or clocks, would have remained in this imperfect state until today if it had not been for the invention of the pendulum, which means "something that swings." You all remember the story of Galileo, who, when a boy, watched the chandelier as it swung to and fro in the cathedral at Florence..."